A Fusion of Swiss and English 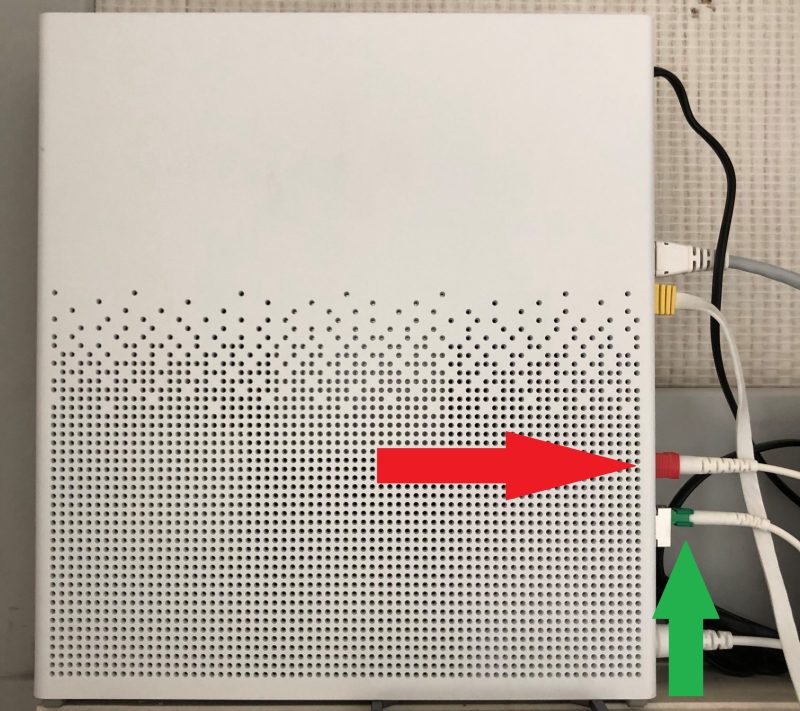 We switched Internet providers from Salt to Swisscom recently – basically moving from 10Gbps service to 10Gbps service.  Or so I thought….

What Swisscom actually delivered was an Internet Box 4 (ok) and a standard fiber cable (which I thought….it’s light.  There can be no difference….).

In looking at the speed on the Internet Box 4, it was clear that the service I was getting (1Gbps) was not what I expected and was subscribing to (10Gbps).  Yes, we are talking First World Problems here….!!

Naturally, I wanted what I was paying for and contacted Swisscom.  I was told I need a fiber cable with a red end, not a green one.  Yes, it seems there is a difference.  The expectation at this point was in 2-3 days, I would have a new cable and then would switch them over and <drumroll> 1Gbps would become 10Gbps.

Five days later, I wake up and find the Internet (and phone and TV) not working.  Which considering a working from home situation, it’s not good.  My cellphone reception is so bad that I rely on Wifi Calling….so hotspotting myself is painful.  I eventually called Swisscom.  Twice.  A torrid experience indeed which finally resulted in a 1st line tech telling me that I was being “upgraded” to 10Gbps (and remember, I ordered this service 10 days earlier) and it would work again in 2 days once the cable arrived and they had configured the new speed.

This was Wrong!  Maybe thankfully, when the cable arrived the next day, I connected it and had Internet again.  Why the tech does not understand and explain this, I do not know.  I gained, I suppose, a day with Internet when expecting to be on a slow hotspot….yay!  He also did not believe I could be using the service nor that I had an Internet Box 4….in my bloody hands!

Which brings me to the crux of what I am starting to understand.  My 10Gbps service from Salt was using a cable with a green end…..was this (CG-NATted) service also only running at 1Gbps?  I don’t recall seeing this information in the router but……I do suspect it to be the case.

Having ordered 10Gbps from Swisscom and received kit allowing only 1Gbps makes me believe that everyone is getting this service and paying for the faster service.  Without a clue!  It is definitely falling into First World Problem territory but if I am paying for something, I want it.  I know I cannot saturate it but that’s not what this is about.

So, Swisscom, I am extremely annoyed at this and wonder if you’re gaming people.

We use cookies on our website to give you the most relevant experience by remembering your preferences and repeat visits. By clicking “Accept All”, you consent to the use of ALL the cookies. However, you may visit "Cookie Settings" to provide a controlled consent.
Cookie SettingsAccept All
Manage consent

This website uses cookies to improve your experience while you navigate through the website. Out of these, the cookies that are categorized as necessary are stored on your browser as they are essential for the working of basic functionalities of the website. We also use third-party cookies that help us analyze and understand how you use this website. These cookies will be stored in your browser only with your consent. You also have the option to opt-out of these cookies. But opting out of some of these cookies may affect your browsing experience.
Necessary Always Enabled
Necessary cookies are absolutely essential for the website to function properly. These cookies ensure basic functionalities and security features of the website, anonymously.
Functional
Functional cookies help to perform certain functionalities like sharing the content of the website on social media platforms, collect feedbacks, and other third-party features.
Performance
Performance cookies are used to understand and analyze the key performance indexes of the website which helps in delivering a better user experience for the visitors.
Analytics
Analytical cookies are used to understand how visitors interact with the website. These cookies help provide information on metrics the number of visitors, bounce rate, traffic source, etc.
Advertisement
Advertisement cookies are used to provide visitors with relevant ads and marketing campaigns. These cookies track visitors across websites and collect information to provide customized ads.
Others
Other uncategorized cookies are those that are being analyzed and have not been classified into a category as yet.
SAVE & ACCEPT
Powered by